Buses in Fuerteventura: How to Use Them

Buses in Fuerteventura are cheap! The minimum fare on all routes is 1.45€. The maximum fare, for the longest journey on the island, from Puerto del Rosario to Morro Jable, is 10€. When you get on the bus, state your destination, and the driver will tell you how much the fare is.  When you pay, you get your receipt. The amount you give the driver cannot be more than five times the amount of the fare, and the drivers will not accept 50€ notes. 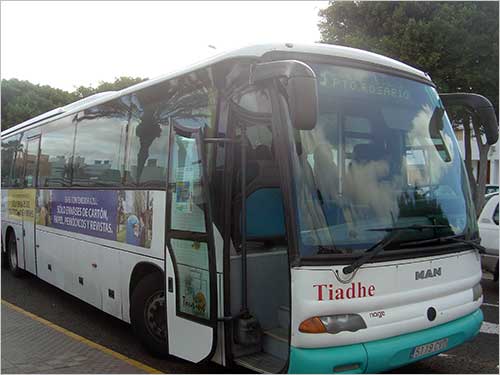 You are not allowed to carry large bags, cases, push chairs, surf boards, bikes, etc on to a bus – these must be put into the large luggage hold at the side of the bus. 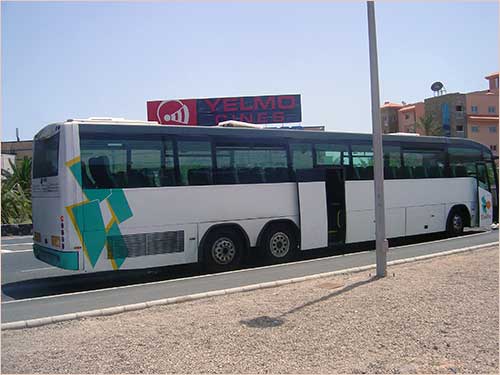 At a bus stop, if the bus doors close then you won’t be able to flag the bus down if you are a little late.  So my advice is to get to the bus station/stop early.  There are bus stations in El Cotillo, Corralejo, Puerto del Rosario, Gran Tarajal and Morro Jable, where you will find a limited number of facilities.  The buses always pull into a bus station to pick up and drop off.  To get on at a bus stop it is a good idea to stick out your arm to show that you want picking up, otherwise it might go straight past you.  If you are getting off at a stop that it is not a bus station, then it is a good idea to press one of the overheard buttons which will indicate to the driver that you want to get off at the next stop.  If you, or someone else doesn’t, then there is a chance that the driver will go straight on, especially if there is no-one to get on. 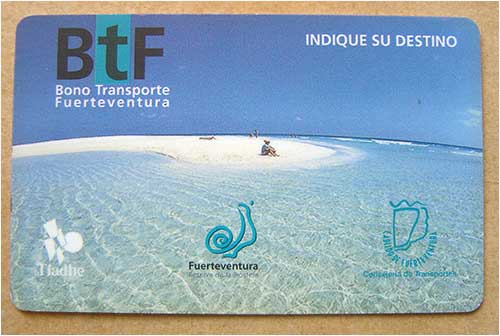 For regular travel on the Fuerteventura buses, I recommend that you get a BtF (Bono Transporte Fuerteventura)  Bono card – this is a discount card that gives you a 30% discount on all journeys on all the bus routes. It is easy to buy and use, because you get it from the bus driver; and it is a convenient credit card size and is made of plastic.  You ask the driver for the card, which costs 2€, and then you charge it up with a multiple of 5€ between 15€ and 50€.  The bono card can then be charged up at any time.  The driver will give you a receipt for the amount paid.  The card is very useful for people on holiday because once you have bought it and charged it up, then you can use it straight away.  There are the added advantages of, firstly, it not having an expiry date, so any amount left on the card can be used in future visits; and secondly, the card can be used by any number of persons and is transferable between people.  So you only need one card per family.

Once you are on the Fuerteventura buses, with your discount card, you put the card down on the plastic sensor located in front of the driver, next to the ticket machine; tell him/her your destination; and then pick up your card and sit down.  Your card has automatically been debited and you don’t have to get a ticket.  It’s as easy as that!  So it’s well worth getting a BtF bono card for your 30% discount.