Fuerteventura Beaches Team - About Us

The Fuerteventura Beaches team is made up of local insiders who share the passion about their island. The site is totally independent, and receives no funds from the different local governments. We update the site in our free time. 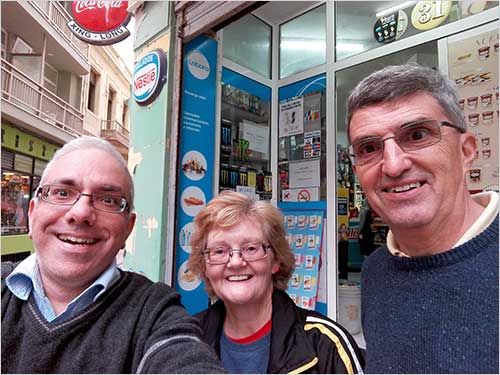 The Fuerteventura Beaches team on a chilly winter day, from left to right: Sunny, Sally, and Stephen

Stephen is from England. After holidaying in Fuerteventura for many years, he fell in love with the island, and moved permanently there in 2003. He currently works as an English teacher, and is an excellent cook as well. His helpfulness has led him to become a Tripadvisor Destination Expert for both Fuerteventura, and Caleta de Fuste. He often posts on forums about the island, and regularly updates his own website www.caletafuerteventura.com

Stephen's wife, Sally, also helps out with ideas and contributions. She also deals with the Fuerteventura-Beaches Facebook and Instagram pages.

Sunny is based in Gran Canaria and takes care of the technical side of the site, as well as managing the team. He runs a site about his island, Gran-Canaria-Beaches.com