The public Fuerteventura buses are run by Tiadhe, who have a fleet of modern buses that link the main towns on the island.  Using the buses is an excellent way of seeing the island if you don’t fancy hiring a car.  Travelling in Fuerteventura buses is a relatively cheap and easy way of getting about; and is relatively straight forward as there are a limited number of bus stations and stops.  The local Spanish word for a bus is guagua (pronounced wah-wah). The drivers are friendly and helpful, and thousands of tourists and local people use the service every day. As Fuerteventura is relatively small 100 km x 30 km) it is possible to go from one end of the island to the other, and return, in one day.

The Fuerteventura buses are white in colour with the Tiadhe logo on them, and are either 4 or 6 wheeled, and can carry around 50 passengers. No-one is allowed to stand up on the bus if it’s full.  If it is full, which is unusual, then you have to wait for the next one.  Most of the bus routes start or finish at the bus station in Puerto del Rosario, the capital of the island.  This is a changing point for getting on another bus if you want to go elsewhere on the island.   The buses are punctual (except when there is a breakdown), and they move quickly on the routes because of the limited number of bus stops. 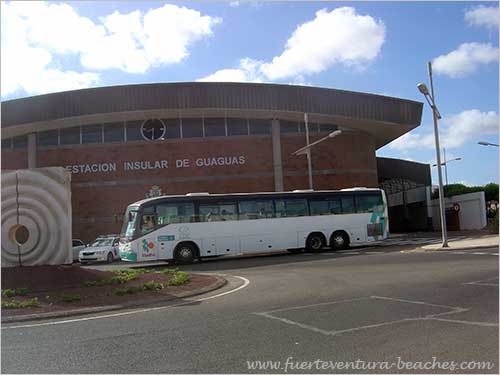 A bus at the Puerto del Rosario bus station, in Fuerteventura

Fuerteventura buses use 17 routes on the island, which are:

The routes that serve the airport are Route 3 and Route 16.  It is only a bus stop at the airport so make sure that the driver knows you want to get on or off there, otherwise he or she might not stop.  For anyone travelling to Corralejo, you have to change at the Puerto del Rosario bus station.

All routes have a Monday to Saturday timetable, and a reduced service on Sundays and Fiesta Days/Public Holidays.

Full details of the bus routes and timetables can be found on the Tiadhe website: http://www.maxoratabus.com/tiadhe/en/

A Special Bus Route to Cofete

In the Summer of 2014 a special bus route was introduced, which is an extension to Route 1.  This service is a special, 21 seat, 4 x 4 wheeled bus that goes from Morro Jable to Cofete along a rough track.  The bus picks up at the Morro Jable bus station and goes to Puertito de la Cruz at the bottom of the island, to the Jandia lighthouse and to the beach of Cofete.  The bus leaves the Morro Jable bus station at 10.00 and 14.00, and leaves Cofete at 12.30 and 16.30.  It is an ideal way to explore the isolated and majestic beaches at the south of the island.  The cost per journey is 2.50€ per person.

How to Use Fuerteventura buses

If you would like to learn more about how to use buses in Fuerteventura, and the bus cards that will save money, click here to read our detailed article.

So, using the Fuerteventura buses is an ideal way of getting around on the island, even if it’s just one trip out on your holiday.  A half day trip to Puerto del Rosario from Caleta de Fuste, or a day trip to El Cotillo from Corralejo are examples of short trips to see a little bit more of Fuerteventura.

Click here to go from Fuerteventura buses to Home page