Many guidebooks about Fuerteventura mention Villa Winter as a place to visit on the island.  However, this is not as easy as it sounds, because it is located in an isolated position, overlooking the remote Cofete beach on the south west coast of Fuerteventura.  Access is along a long, rough dust track and is generally only suitable for 4x4 vehicles. Insurance cover for hire cars is most likely to be invalid, as it is an unmade road. Fortunately, there is a 4x4 minibus service that operates to the area from the bus station in the nearby town of Morro Jable, and it leaves from there at 10am and 2pm.  The return journeys from Cofete are at 12.45 and 16.45. 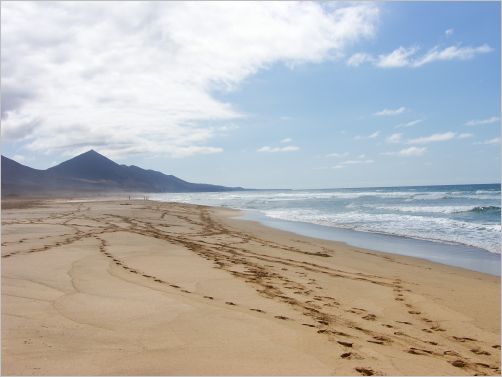 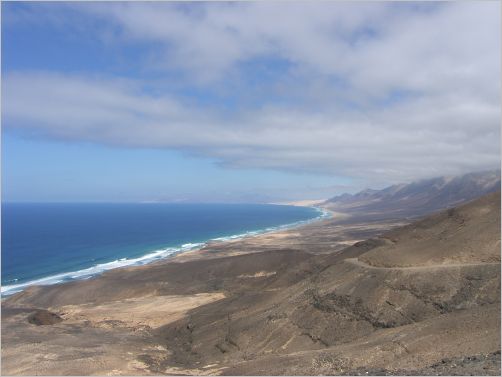 History of Villa Winter, in Fuerteventura

The fortress is named after the man who built it.  During the 1930’s, Gustav Winter, a German engineer, signed an agreement with General Franco (Spain's dictator at that time) to lease most of the Jandia Peninsula, which is the southernmost part of Fuerteventura. It is said that an agreement was also signed to make the area a military zone, and this enabled him to drive out the local people.  He was also allowed to carry out important works for the Third Reich, and so was able to use political prisoners and German workers to make the road from Morro Jable to Cofete.  Close by, near the beach, is a cemetery which has a lot of mystery about it, as it was possibly the burial ground for men who died during the work. 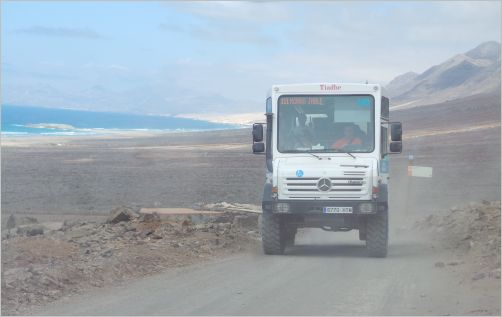 It has a backdrop of the highest mountain on the island, the Pico de Zarza, and is very isolated. Gustav Winter had the villa built in 1946. It is an imposing building and has two floors, a central courtyard, a tower, a balcony and some underground rooms.  A rough track is the access to it. The grounds of the villa are marked out in the shape of Fuerteventura, and the building occupies a position in the appropriate place on the island. It was built by men who were transported in from Morro Jable. Everything was kept secret; the area had armed guards. 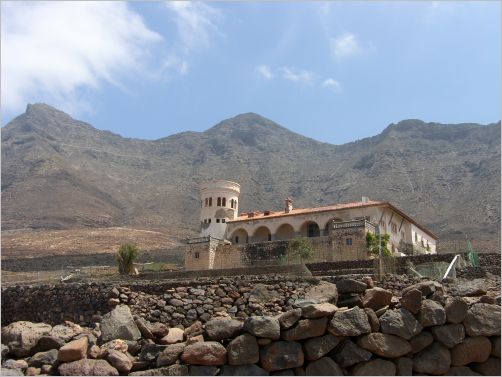 The fortress is currently owned by the Lopesan Group (a Canarian company who specialize in big building projects, and hotels across the islands). It is looked after by a caretaker who, apparently, will let visitors look around on payment of a tip. Visitors who have been there say it has an air of mystery about it, as some rooms are accessible but others are blocked off. 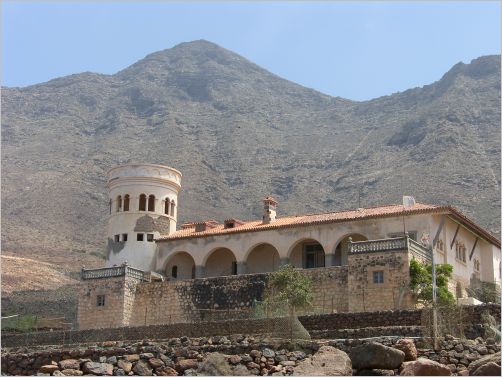 Villa Winter at a closer look

The presence of the mansion, in its isolated position, has led to various conspiracy theories as to why it was built.  Little seems to be known about want went on after the Second World War, and so there is a lot of mystery surrounding the reasons for its existence and role. Since then, there have been many rumours and theories as to why it was built, and what it was used for. Gustav Winter was, supposedly, a German secret agent during the war, and it is known that he did not live there, as he resided in Morro Jable. 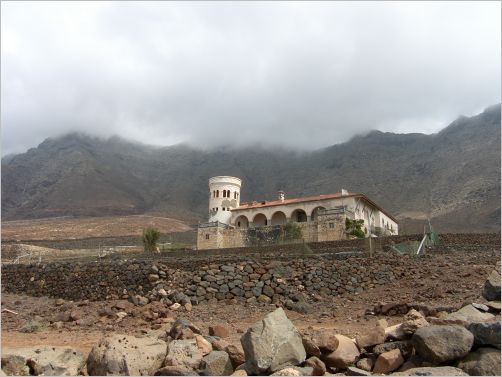 Villa Winter with the majestic Pico de Zarza in the background

Some people believe that this building, was used as a secret hideaway for German officers who left Germany at the end of the war.  Others say that it was used as a clinic, and that plastic surgery was carried out on these German officers, before they moved on to start a new life in South America.

Some historians say that Villa Winter was a strategic military base, that provided a beacon for a small aircraft landing strip in Jandia, and for U-boats that came up the coast.  In the upper floor of the tower is a very large fuse box that seems to indicate that large equipment used to be located there.

Others say that there was a subterranean harbour close by, which was used by U-boats.  This is a possibility, as there could be lava tunnels going into the mountains, which could be used. In the 1970’s a combined Spanish/Austrian group lost their lives in an accident while searching for this place.

A team, working for The History Channel, has been investigating and filming on Fuerteventura, to try and uncover the mystery surrounding Villa Winter at the end of the Second World War. This film is part of the series "Hunting Hitler", and has been shown across all major TV networks. It will be interesting to see if they uncover any evidence that may go some way to solving the mystery.

Click here to return from Villa Winter to Home Page