Gran Tarajal Beach is located in the municipality of Tuineje on the island of Fuerteventura. You could say that it is a city beach since it limits the people of Great Tarajal with the sea. If you look at the longish island from north to south, the beach is located almost in the middle, on the eastern side. The distance between Gran Tarajal and the town of Tuineje is about 13.8 kilometers by road , and takes a little over fifteen minutes to go from one place to the other. If you are coming from the south of the island driving north on the FV-2 road, you must pay attention to the intersection that will let us go to the beach of Gran Tarajal using the FV-4 road towards the east.  Plenty of parking areas are available all along the beach. 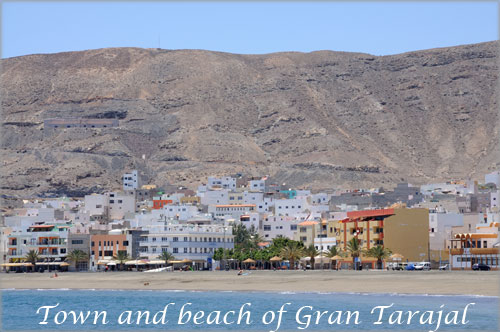 The sand of Gran Tarajal beach is a black in color.  The limits of the beach are, on one side a mountain with a municipal football field on the skirt of the mountain, and on the other side is the Gran Tarajal harbour. The beach is over 500 meters long. Its waters are calm during most of the year, thanks to the protection of the mountain.

All along the beach, there is a promenade where tourists who come to Gran Tarajal, as well as local residents, meet. On the promenade you will find plenty of restaurants and cafes that offer visitors the best services and gourmet attention, where you can taste the typical local cuisine, mostly freshly caught fish dishes. These are delivered by the fishermen who dock their boats in the harbour at the southern end of the beach. Big ferries also use this harbour to link Fuerteventura with other Canary islands such as Lanzarote, Gran Canaria, and Tenerife.