El Cotillo in Fuerteventura is a popular small village on the north-west coast, which has developed around a fishing harbour and an 18th century fortification known as the "Torre del Toston" or "Castillo de Rico Roque."  It has a combination of black cliffs, sandy beaches and sea lagoons.  It has a ‘laid back’ or ‘away from it all feel’ about it. Windsurfers head for the big waves on the southern beach and families and sunbathers go to the beaches to the north. 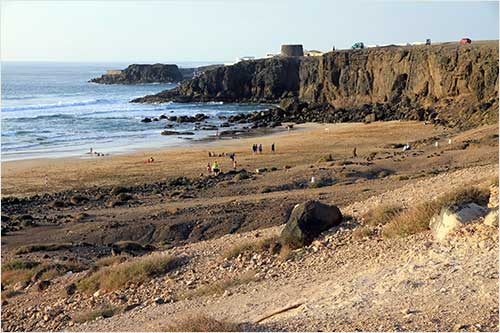 El Cotillo in Fuerteventura is a favourite place for locals and tourists because of its wild and remote type of location on the north-west coast of the island.  Until a few years ago it was a very small village that was linked to the fishing industry, but it has now seen some new developments which have extended the village and provided some holiday apartments and two small hotels.

Most people who go to El Cotillo in Fuerteventura are heading to the beach, which is its major attraction.  To the north is the La Concha beach, which is a crescent shaped, white sandy beach suitable for families and sunbathers.  On the north side of the beach, naturists tend to gather, and also in the sea lagoons which stretch northwards to the lighthouse.  La Concha has Blue Flag status.

The beach to the south is long, with yellow sand.  The wind blows in large waves from the Atlantic, and so is ideal for surfers, windsurfers and kitesurfers.

The most historic building in El Cotillo is the 18th Century, Torre de Toston, which was built to protect the island from pirate attacks.  It is now a small information point and sometimes has exhibitions.

The large lighthouse to the north has recently become home to a fishing museum.

In the village there is an Inpescasa supermarket, several restaurants and bars, a community centre, a primary school, a plaza and a bank.

There is an old harbour area, and a new harbour just to the south on the other side of the headland.

The football team, CD Cotillo, play in the Spanish Third Division (Group 12) and are the highest league placed team on Fuerteventura.  They play at the football ground which is on the edge of the village, next to the supermarket as you drive into the village.  Home games are played on Sundays.

There is an annual music festival held on the La Concha beach, over the first weekend in July.  It’s called "Fuerteventura En Musica," and attracts large crowds on the Friday and Saturday evenings/nights, with many camping there over the weekend.

The village’s Fiesta is held in mid-August and celebrates the Virgen de Buen Viaje (the virgin of good travel). It is a popular fiesta that attracts people from all over the island, as the events appeal to young and old during the height of summer.

El Cotillo in Fuerteventura is served by public transport.  The Number 8 links the village with Corralejo, and the Number 7 links it with Puerto del Rosario.

El Cotillo in Fuerteventura: Things to Do

Ideas About Things To Do In El Cotillo:

• Go to La Concha beach and the other white sand beaches

• Walk around the new and old harbour areas

• Go to the lighthouse museum to the north

• Watch a sunset from the beach or a bar

El Cotillo in Fuerteventura is one of the favourite destinations for many visitors on the island.  A few years ago there was a danger of the small village being overdeveloped, but one of the effects of the economic crisis has been the halting of further development.  Most people like El Cotillo as it is, so hopefully the status quo will be maintained, and the village will remain a tranquil and beautiful place.